If you are an employer, you have probably heard the term "exempt" and "non-exempt" employees before. Do you know the difference?

Here is a quick summary: 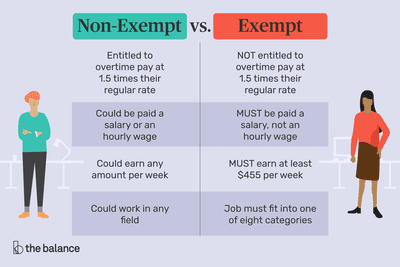 Read the scenario below and see if you are able to identify if Sara or John is an exempt employee.

It is finally Friday night but Sara, a newly-employed editor at ABC Creative Studios is feeling a little stressed out. She has not finished her proposal that is due on Monday. Since she did not make any plans with anybody that night, she spent most of her Friday night editing and working on her proposal. On Monday – the day she gets her paycheck – she found out she got the same amount of money she would have gotten if she hadn't stayed late.

Meanwhile on the same Friday in the same building, John, a maintenance worker, chooses to take an extra shift and work overtime. He doesn't have to, he could leave at 5p.m. if he wanted. However, on Monday, when he receives his paycheck, he knows he'll receive extra money from the overtime hours he had worked.

If you recognized that Sara is an exempt employee while John is non-exempt, you are right. An exempt employee is an employee who is exempt from overtime pay and/or minimum wage, and other rights and protections afforded to nonexempt workers. They are usually paid a salary rather than hourly wage. The most common FLSA exemptions are also known as "white collar exemptions". Typically, exempt employees take up executive administrative, professional, outside sales positions in the company.

Currently, according to the test guidelines provided by the website of FLSA, an employee has to make at least $455 a week ($23, 660 a year) [1] to be exempt. An exempt employee must be paid the same amount, or a minimum salary regardless of how many hours they work or how well they perform. They are not paid extra for putting it more than 40 hours per week, they're paid for getting the job done. For example, Sara is offered a basic salary with bonuses as further compensation.

The benefits of course are obvious. Sara does not have to be concerned about what a drastic drop in hours worked that week will do to her paycheck. Furthermore, since they are compensated for the jobs they do and not the time it takes them, they often have a more flexible work environment than non-exempt employees. Sara's employer is understandably more interested in whether Sara completes her given task that week, such as finishing her proposal, instead of how long she took for her lunch break or if she left early the previous Friday.

Let us talk about John now, who is compensated by the time he works. Non-exempt employees like John, as the term implies, are non-exempt from FLSA requirements. Employees in this category must be paid at least the minimum wage for each hour worked and given overtime pay of no less than one-and-a-half times their hourly rate for any hours worked beyond 40 each week. Although they typically receive hourly pay, employers can also pay them on a salary basis. They could also work in any field, although some sources indicate that most non-exempt employees are blue-collar workers.

To summarize, whether employees are exempt or non-exempt are dependent on these three "tests":

If an employee has a "guaranteed minimum" amount of money he or she can count on receiving for any work week, the employee is exempt.

An employee who meets the two tests above is exempt only if he or she also performs exempt job duties. These FLSA exemptions are limited to employees who perform relatively high-level work. Do note that job titles or position descriptions are of limited usefulness in this determination.

The three typical categories of exempt job duties are:

Employee regularly supervises two or more other employees, has management as the primary duty of the position, and has some genuine input into the job status of other employees.

Usually means work which is predominantly intellectual, requires specialized education and involves the exercise of discretion and judgement. Some employees may also perform "creative professional" job duties which are exempt, such as actors, musicians, composers, journalists, writers. (do note that this is not an exhaustive list.)

This classification is designed for relatively high-level employees whose main job is to "keep the business running". Examples include labor relations and personnel (human resources employees), payroll and finance, records maintenance, accounting and tax, marketing and advertising, just to name a few.

In general, both exempt and non-exempt employees receive basic protection from state and federal laws, but non-exempt employees enjoy better legal protection from the government. Unemployment benefits vary from state to state, but generally both exempt and nonexempt employees can collect unemployment benefits. Do check with your state's Department of Labor for more detailed information. Tax liabilities are the same for both categories as all pay is "earned income" and therefore taxable to the wage warner based upon the tax bracket.

Whether you are an employee or an employer, as members of the workforce it is best to be informed. This article is intended to be a primer on this issue, but for more information, please visit the Department of Labor's site to address federal and state laws specific to your state.

[1] Please note at this point to check applicable state laws as the salary basis requirements may vary.

Workstream is a hiring platform that helps employers get 4x the number of qualified applicants. The world's most trusted brands use Workstream to optimize job board postings, automate screening and interview scheduling, communicate via text message, and streamline the onboarding/training process. See what all the buzz is about by scheduling a demo or email us hello@workstream.is!

McDonald's vs KFC: How Do They Compare for Hourly Work?